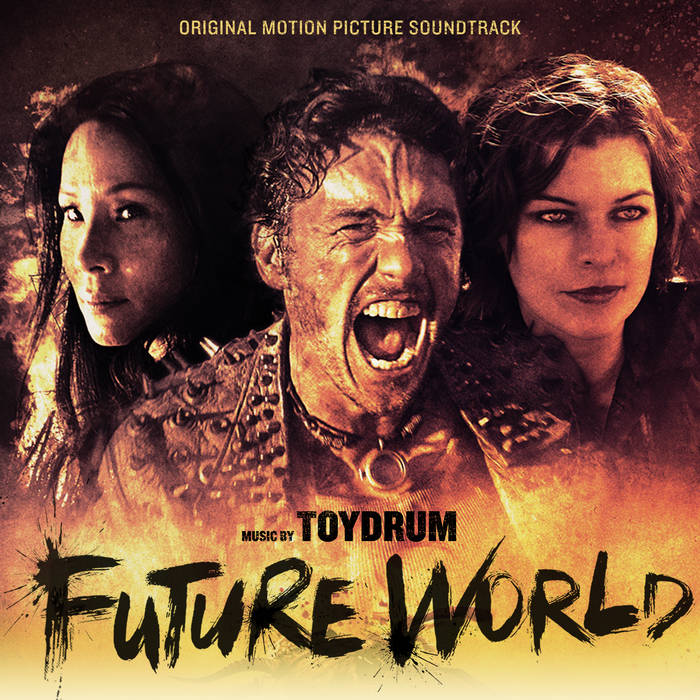 shocky37 Great soundtrack!!! Thanks for the job and inspiration ⚡🙏🏽⚡

ABOUT FUTURE WORLD
Inside a desert oasis, a queen (Lucy Liu) lays dying as her son Prince (Jeffrey Wahlberg) travels across barren waste lands to find a near-mythical medicine to save her life. After evading violent raiders on motorbikes led by the Warlord (James Franco) and his enforcer (Cliff “Method Man” Smith), Prince meets Ash (Suki Waterhouse), the Warlord’s robot sex companion-assassin who's in search of her own soul. As Prince is captured by the Druglord (Milla Jovovich), the Warlord’s forces roar in – and Prince fights to save the remnants of humanity.

About TOYDRUM
Pablo Clements has a long history and following for his remixes from his PYSCHONAUT and MO WAX days and in UNKLE along with James Griffith, they remixed the likes of Massive Attack – False Flags, Noel Gallagher AKA What A Life and Noel Gallagher – Let The Lord Shine A Light On Me – Black Mountain – No Hits, Autolux – Turnstile Blues, The Queens Of The Stone Age – I’m Designer, Evil Nine – 13 Icicles, The Big Pink – Too Young To Love, Grinderman (Nick Cave) – Worm Tamer, Trentemoller – Neverglade. In 2012 Pablo and James Griffith along with James Lavelle collected Remixer of the Year (for UNKLE) award from the UK Music Producers Guild for the remix of Band of Skulls – The Devil Takes Care Of His Own.

Pablo and James work is very versatile, as well as writing music for their own collaborative projects they are able to switch their hand to scoring music for films. They have co-written, produced and recorded many tracks for the big screen, including With You In My Head for the TWILIGHT SAGA: ECLIPSE directed by David Slade, Every Single Prayer featuring Gavin Clark for the film THE CALLER directed by Matthew Parkhill, the whole music score for ODYSSEY IN ROME, directed by Alex Grazioli a documentary on the life of Abel Ferrara and the documentary LIVES OF THE ARTISTS FOR RELENTLESS directed by Ross Cairns for RELENTLESS, a film about extreme sports people (snowboarding, musicians and surfers).

In 2012 James Lavelle decided to put UNKLE on hold for a while, so Pablo and James built their own studio in Brighton, the TOYROOMS, where they operate under the Producers/Artist name Toydrum. They have worked on a variety of projects, LAWLESS with Nick Cave and Warren Ellis, Red Shoes – A short film For Vivienne Westwood, PIECES a film directed by Jack Weatherly, who they have worked with before on a film called THE SCORE FOR EURO 2012, remixes for the likes of Trentemoller and Noel Gallagher. They remixed Noel’s In The Heat Of The Moment from his album Chasing Yesterday, the remixed was used on Assassin’s Creed Syndicate E3 trailer.

Toydrum released Distant Focus (2014) on their own label Underscore Collective a 6 track mini album it is a progression of the work Pablo and James Griffith created under the UNKLE name. They released EVANGELIST (2015) album, a project they worked on with the late Gavin Clark, which obtained great reviews. The tracks God Song and Whirlwind Of Rubbish featured in the Bafta wining series THIS IS ENGLAND ’90 written and directed by Shane Meadows. Toydrum scored the film LONDON FIELDS and the film DETOUR. They previously wrote the music for Alice Lowes film PREVENGE, which Lakeshore Records released in 2017.

Bandcamp Daily  your guide to the world of Bandcamp